Aslan’s Own Dachshunds: Announcing a pending litter between:

We expect a litter with exceptional conformation, temperaments, gameness, and wonderful wire coats. There is also the possibility of smooth coats from this breeding. If you would like more information, please email me. 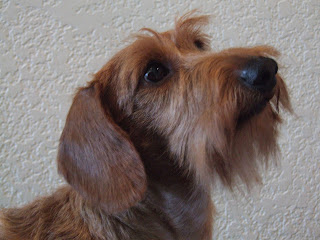 Tucker has exceptional movement and a rock-solid topline. He has multiple AKC group placements, multiple IABCA International Best In Show wins, and multiple UKC Best In Show wins. He was also the National Miniature Dachshund Club’s 2009 Best of Variety winner. 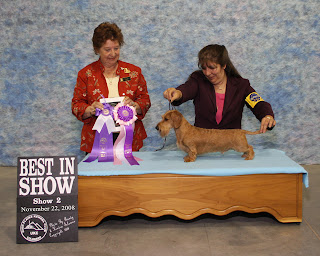 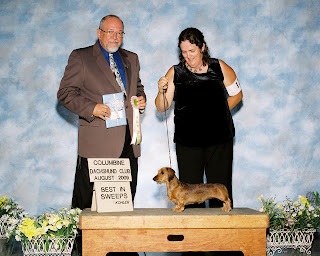 Tucker taking a BIS win at a UKC show. 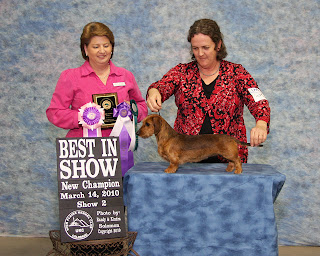 Both bred and owned by Pam Bethke at Doxikota.

Winnie had a fabulous weekend at her first UKC shows. Out of 5 shows she went Reserve Best In Show twice and Best In Show once – finishing her UKC Championship out of the Best In Show classes!

She is pointed in AKC – we will resume working toward her AKC championship later this summer.

We also intend on working towards her Earthdog Title this year. Winnie shows much gameness, and no squirrel is safe in her presence. 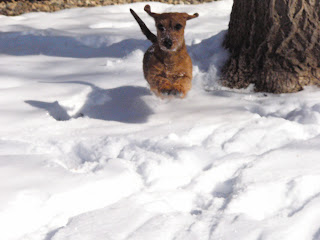 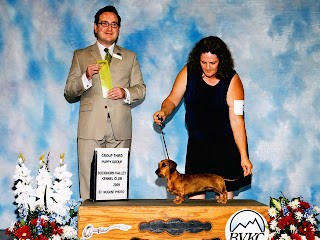 Winnie at one year took Best Of Variety and went on to win a Puppy Group Three, her first weekend out showing. Her BOV would have been her first Major – except a dog was excused for snapping at the judge making the potential 3 point major to a 2 point win.

This entry was posted in Uncategorized. Bookmark the permalink.